It’s a recognised fact that continental Europe has some of the greatest, if not the greatest driving roads anywhere in the world. From the high mountain passes of the Alps, to the beautiful National Parks around the South of France, to the rolling hills of Tuscany, there is a scenic drive to suit all tastes and styles.

The other thing that makes driving in Europe so in incredible is how closely linked up the countries and these scenic drives are. Start in Baden Baden Germany for example, spend a day driving through the heart of the Black Forest via the B500 Hochstrasse to Zurich. Next day, head south, around Lake Luzern, and loop around the big passes of the central Swiss Alps, such as Grimsel, Susten and Furka Passes. Next, head south across San Bernadino Pas and onto the Italian Lakes. From here, continue south to Tuscany, and drive south of Route Mille Miglia and the SR222, then onto the sweeping roads of La Crete, with a visit to the supercar manufacturers around Bologna along the way. You probably get the point, it’s just one scenic drive after another

Below is a selection of 10 great scenic drives to warm you up. If you want to explore more, just download the app, where there are now 100+ great roads across continental Europe to explore and drive, including Google Maps with suggested stop points for sights, a bite to eat and even recommended overnight stays.

Scenic Drives in Germany – the B500 Hochstrasse

The B500 scenic drive runs almost the entire length of the Black Forest (Schwarzwald), from the spa town of Baden Baden in the north, and south to the Rhine that borders with Switzerland in the South – in total that’s around 150KM of scenic drive. However, the road is intersected in parts by other roads, so be sure you trace the route carefully and plan your drive before setting off.

There is one stretch of this scenic drive though that simply cannot be missed, and that’s the northern part, from Baden Baden in the north, to the small town (or rather collection of houses) of Kniebis to the south. This 50KM scenic drive is definitely the best of the entire route, as it elevates above 1000M, from which you are offered some incredible uninterrupted panorama views across the Rhine Valley. It’s near this summit that you can also enjoy the breathtaking stretches of sweeping roads you can see in the picture above.

Due to the roads popularity with bikers, the speed limit was recently cut (in parts) from 100kmh to 80kmh, but it’s still incredible fun to drive – another note of caution – again because of it’s popularity, try to drive early morning (the forest is often shrouded in mist) or around 7pm, when you will often have the road entirely to yourself.

The Val d’Orcia or La Crete region to the south of Tuscany boasts endless rolling hills covered with grain or sunflowers, a rich green valley which encompasses the Orcia river, from which the zone derives its name. Not forgetting the vineyards with renowned wines of Brunello and the newcomer on the market, the Val d’Orcia DOC. It is no wonder that this territory is protected as a World Heritage Site by UNESCO.

There are so many amazing scenic drives in this region it’s a case of take your pick really – however, if you can combine a great road with some great vineyards, especially when the wine is a good as Brunello, why not do so? The sp14 / sp146 route is not just a scenic drive but an exhilarating one from behind the wheel. It takes you from the wine producers Castello Banfi in the south, through the heart of the Brunello wine producing region past the village of Montalcino, the regional capital, finishing in the beautiful hill top village of Pienza where the Palazzo Piccolomini is located, one of the first example of Renaissance architecture.

Sweeping vistas don’t get better than this anywhere in Europe!

The scenic drive along Trollstigen is undoubtedly more dramatic than most people are used to, but what is special about driving in Norway is the observation that people live just about anywhere here. Even on the narrowest mountain ledge or small crag there will be a house. We are bound to the landscape and the natural surroundings through settlements that have offered us a livelihood throughout history.

The Geiranger-Trollstigen scenic drive features numerous highlights and the eleven hairpin bends of Trollstigen as well as the view from Ørnesvingen down to the Geirangerfjord that will set your pulse racing. Lush valleys, sheltered strawberry-growing areas, precipitous mountains and vantage points are guaranteed to make you dizzy, showcasing some of Norway’s most scenic views. You must allow plenty of time for this scenic drive − stops are welcome whether you want the challenge of a hike to a lofty summit or just to enjoy the view. For those who take the time, there’s so much more to be discovered.

For several centuries the road was an important transport artery between Valldal and Åndalsnes, first as a path and then as a bridleway, until construction of the Trollstigvegen road started up in 1916. Parts of the original pack horse track are still visible and passable on foot. It’s an exciting alternative for anyone who would like to experience the road as it was in days of old.

You will find some of the most fascinating installations constructed on this stretch. Here, view points such as Ørnesvingen, Gudbrandsjuvet gorge and Flydalsjuvet gorge let you explore the natural surroundings in a unique manner. Taking the ferry on the Geirangerfjord will bring you up close to the well-known waterfalls of Dei Sju Systre, Friaren and Brudesløret while at the same time you will experience the most renowned fjord in the world – the Geirangerfjord, which is on UNESCO’s World Heritage List.

Not only is this a great scenic drive, it really is a gem of a “drivers” road, which we stumbled on one weekend when the Hahtenjoch mountain pass (that runs parallel and takes most tourist traffic) was shut, and were forced to make a diversion…..

Although we are real fans of mountain passes (the higher and bolder the better) here we make an exception to the rule. Nobody in Europe seems to build roads like the Austrians, prefect tarmac, wonderful cambers, and the way that this one pans out in front of you, it somehow feel like a race track (Nurburgring in parts dare I say…).

What makes this scenic drive a winner? First of all, the surface (as you expect in Austria) is top draw, smooth tarmac, with perfectly cambered corners. Secondly, as said, the road really does just pans out in front of you like a ribbon stretching into the distance, no unwanted surprises, always quiet. It’s then made up of a combination of fast sweepers, which rise, then fall, followed by bursts through densely forested areas, with crash barriers running either side (did we say Nurburgring earlier?). To be honest, you wont want to stop to take in any sights, the pure thrill of the drive (to coin a phrase) will keep you completely focused from start to end. Having now incorporated this road into many of our road trips around the Vorarlberg region, we can say with certainty, it’s absolutely preferable to start Berwang, finish Stanzach, just the way the road pans out, trust us.

To summarise then, 21KM of pure driving Nirvana – then on arrival in Stanzach, turn left, and 5KM later you are at the foot of the Hahtenjoch mountain pass – over you go, loop back around and start again. Love it, amazing! The only thing preventing a full 5 star rating is the fact it only runs to 21km, maybe we are just being too picky? We’ll let you decide in the end.

This is probably the most scenic road you could possibly find, all thanks to the patient and constant work of mother nature carving the rocks that make the Col d’Izoard an iconic place for every sort of climb (by car, motorbike, bycicle).

Part of the Route des Grandes Alpes, the Col d’Izoard is famous for being stage of the “Tour de France”, as it held its first edition in 1922. No matter which side you climb first, you’ll face some of the most unique landscape on Earth, with plenty of hairpins, a perfect (a bit narrow) road surface and the opportunity to park the car on the summit and enjoy the panorama.

On the north side there’s the Refuge Napoléon, typical place for having a break, have lunch and turn around and drive some more up this magical place.

Turini is a real legend among the WRC stages. With a length of approximately 32 km it is run between Sospel and La Bollène passing over the most famous mountain top of the WRC, Col de Turini. Depending upon the year, the stage starts in Sospel and finishes in La Bollène or is run in the other way (La Bollène to Sospel) but still being just as difficult.

We have driven this road on numerous occasions, but we thought maybe as one of the most famous WRC rally stages, we would change it up, and write you the review from the perspective of driving this route in a WRC car….here goes

The start is on the D2566, just after Sospel and before the Throats of Piaon. To get the drivers going, the stage starts with quite very fast long straights before reaching the Piaon where the first hairpins are attacked. After only 3 km the drivers tackle the first sequence of technical hard bends. When they arrive at Notre-Dame de la Ménour they drive through the first key part of the stage where a sequence of hairpins are found. This is followed by a 2.5 km straight near Moulinet where speeds reach up to 180 km/h.

At an altitude of 1170 m they leave the Valley of Bévéra and enter the climb up to the Col de Turini. A number of hairpins climbs up to the spectacular spot at 1607 m. The Col de Turini is a very unique place for drivers and public, because of the emotion and environment. The stage ends in La Bollène.

Note: the fastest time was in a little over 20 minutes by Petter Solberg / Phil Mills in their Subaru Impreza in 2002 – average speed was an incredible 89,4 km/h / 55 MPH. Allow at least three times this amount of time to complete the stage!

his road just goes to prove that what goes up, doesn’t need to come back down again – well at least not like your classic mountain pass. The beauty of the Kaunertal Glacier Road is it’s just a single road up to the glacier – then the same road back down. That creates one important distinction from normal mountain passes – no through traffic = much less traffic 🙂

This road is actually in the top 10 highest paved roads in Europe, and tops out at nearly 2700M, where the large car park for the winter ski area offers great views across the glacier itself – the other thing is if you do happen to have a spare pair of skis with you, you can ski on the glacier all year around, though the cooler mornings are advised.

The drive itself has three stages, the first sweeping roads through the forest, and past the toll road entry. Stage 2 starts to get steep, past two glacial lakes, followed by a series of 90 degree switchbacks. The final stage the road opens again as you head over the tree line to the summit. In total around 30km of driving paradise each way.

So, as you leave Switzerland and head into the Austria Alps (after perhaps a little drive around St Moritz), please be sure not to miss this amazing 5 star diversion!! 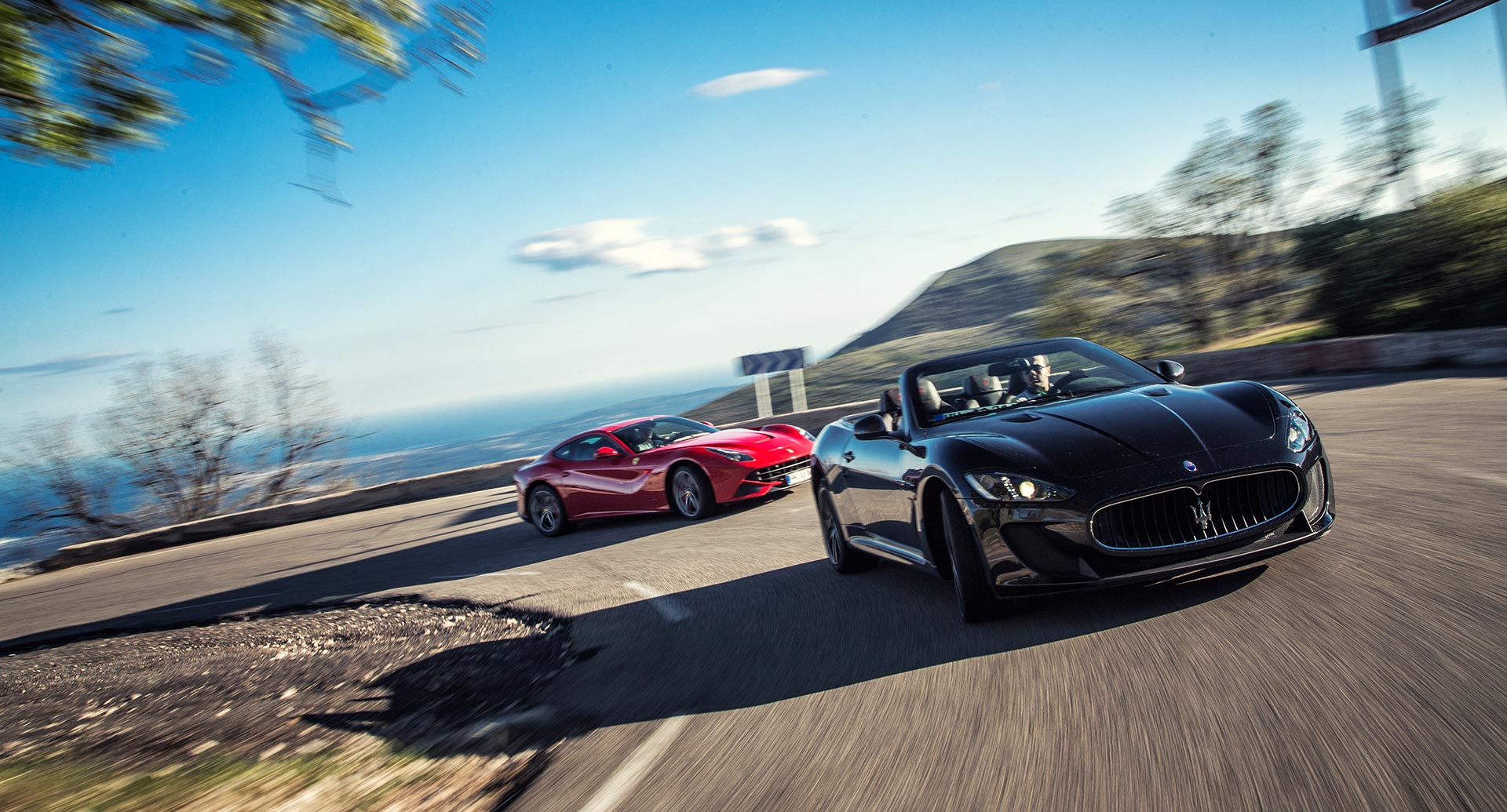